As this website is about lighthouses, many people send me emails with photos and links. This past week I received three such emails so I will combine them all in one as they all contained photos of lighthouses. – JC 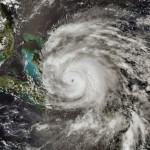 These pictures show the seas that came ashore after Hurricane Irene (August 20 – 29, 2011) went by.  Many of you have been to Peggy’s Cove, Nova Scotia, Canada. Well, the RCMP had the road shut down – only people who lived in the village could enter. The road was closed on both sides of the cove; waves were coming in over the road at about 10 meters, 30 feet for those that are not bi-measurement. The last hurricane that went by actually moved the restaurant at Peggy’s Cove a couple of feet.  These pictures were taken with a telephoto lens from the hill beside the cove. The pictures were taken by a friend of a neighbour (will the friend of the neighbour please come forward and introduce yourself – nice photos) – JC

Awesome power, flooded basements along the coast, roads washed away, no one hurt.

These are a few snap shot of Peggy’s Cove during the Hurricane.The light house is over 60 feet tall. Notice some of the waves breaking ashore in the background of some of the homes.

After going through the slides, don’t miss the video at the end.

On April 1, 1946 the crew of the Scotch Cap Lighthouse experienced the power of the sea. A magnitude 7.6 earthquake had created a tsunami in the area. The base of the lighthouse on Unimak Island, Alaska was forty feet above sea level; it was over sixty feet high. The tsunami erased it from the island. It is estimated that the wave had to be over a hundred thirty feet high. Five men died there; the worst ever to befall a U.S. land based light station.

What you see in the gallery below are four photos from the webpage Power of the Storm: 44 Ferocious Waves Attacking Lighthouses

Go to the webpage to see the rest. There are some very beautiful photos there.

Email 3. Two lighthouses in the Maritimes of Canada

This one is in Prince Edward Island (PEI)

A friend of a friend near Winnipeg, Manitoba sent her these photos taken on a car trip to the Maritimes of Canada. Unfortunately I know the province of the lighthouses, but not the names or locations (OK, thanks to the wonders of Google, we now know the names!).

This one is from Newfoundland