For those of you that do not know, MCTS (Marine Communications and Traffic Services)  is “the Branch of the Canadian Coast Guard that provides communications and vessel traffic services to the sea-going public”.

“MCTS monitors for distress radio signals; provides the communications link between vessels in distress and the JRCC/MRSC; sends safety information; handles public communication; and, regulates the flow of vessel traffic in some areas. MCTS is an important link in the SAR system”.

The above is a quote from the official Canadian government website on Maritime Search and Rescue. (about half-way down the page)

What is NOT mentioned above is that MCTS personnel are also the Coast Guard Lighthouse communications link. Through MCTS the lighthouse keepers send weather reports, updated weather reports, messages to Coast Guard offices, and emergency messages both personal and for the public – e.g. distress sightings, radio relays from distressed public in boats or on land, fire reports, sightings of missing aircraft and boats, and their own personal injury requests. MCTS is the lightkeeper’s only link to Search and Rescue (SAR).

Then why is the Canadian government planning on reducing the number of officers on shift from the MCTS stations on the British Columbia coast???

The MCTS shifts are twelve (12) hours long and normally staffed by three (3) officers. If a person calls in sick, then a replacement is paid overtime to fill the position. The government now does not want to pay the overtime and has said that the stations can run one person short on a shift.

According to the MCTS union, CAW Local 2182:

The intention of the Coast Guard in Ottawa is to reduce the number of officers on watch most of the year to save money.

The Conservative government is reversing its commitment to coastal communities and the safety of Canadians from when they were in opposition.

From the Northern View (Prince Rupert): Cuts to Coast Guard hours and changes in procedure coming to Prince Rupert station

Let us take a look at the coverage of Tofino and Comox MCTS. The maps below show the area covered by each MCTS station.

Now let us take a look at the amount of vessels that traffic these areas. The map below was created almost 9 years ago (2003) to show the flow of ship traffic through British Columbia’s 25,725 kilometers of coastline (when you take in all the 40, 000 islands). Every year MORE ships, both commercial and private, are using BC waters. 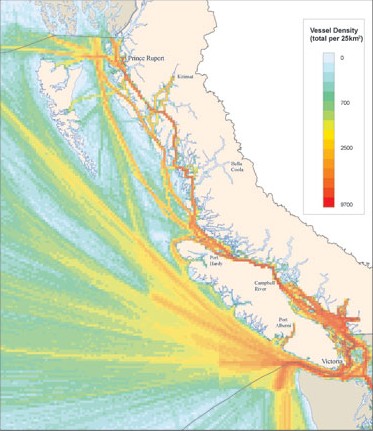 Pattern of marine traffic movements on the B.C. coast in 2003

56% of vessel movements were passenger ships, including ferries and cruise ships, while 29% were tug boats moving barges.

A more detailed report is included in a PDF file here.

You can see from the above map that MCTSOS (Marine Communications and Traffic Services Officers)1 are covering a large area and a lot of traffic. In a quote from another Canadian government site regarding the Coast Guard business plan and expenses, it states that “Pacific region salary dollars are higher compared to other regions because of the need to staff more MCTSOs in response to the region’s marine traffic volume”.

And the government now wants to make the shifts one person short rather than pay overtime. Who knows what might occur when those two people must cope with a marine emergency. Nobody plans a marine disaster, or incident.

Also, being one officer short puts restrictions on lighthouse reports. As it is right now, lighthouse reports are at the bottom of the MCTSOS list for priority. If the MCTSOs become even more short-handed, then marine weathers and other important information from the twenty-seven (27) manned lighthouses will be not be available.

What can you do to help?

WRITE the Minister of Fisheries and Oceans (the Hon. Keith Ashfield – email –  Ashfield.K@dfo-mpo.gc.ca

GET THIS STOPPED BEFORE WE LOSE OUR COASTLINE TO A MARINE TRAGEDY BECAUSE OF OVER-WORKED MCTSOS, AND WE LOSE THE LIGHTHOUSES BECAUSE THEIR ABILITY TO HELP THE MARINE PUBLIC WILL BE COMPROMISED!

If any reader is interested in a career as an MCTSO, then check out the information here.

1 Marine Communications and Traffic Services Officers (MCTSO’s) are skilled in a variety of disciplines that includes transportation systems, marine safety and public communications, and shore-based radar surveillance traffic regulating. MCTSO’s are designated Marine Traffic Regulators (MTRs) by the Commissioner of the Canadian Coast Guard through a Certification Training Program that can take upwards of fourteen month to complete. This training is given at the Canadian Coast Guard College in Sydney, Nova Scotia, and at the MCTS Centre. In the final phase of training, after an extensive period of On-Job-Training, a “Centre Designation Checkout” procedure must be successfully completed.

The valuable role played by MCTS in providing VTS in conjunction with the professional mariner has long been acknowledged by experts on marine safety in reducing incidents. The Canadian Coast Guard’s VTS systems have been examples to the world in utilizing and developing new VTS technology and by training its staff to the highest possible standards. – http://www.ccg-gcc.gc.ca/e0003910#MCTSO