For an update on what a Mise Tale is then please see Mise Tales One.

Do You Want to Buy a Foghorn?

Aberdeen’s Torry Coo on the market for £5,000
Buyers lining up for foghorn

A famous foghorn in Aberdeen has sparked a bidding war between prospective buyers desperate to own a piece of Scottish history.

And property agents revealed several offers made for the much-loved Torry Coo in Aberdeen were “well in excess” of the asking price.

The Northern Lighthouse Board put the 110-year-old horn and store building on the market in July with a price tag of £5,000, but several mystery bidders want to get their hands on the Category A listed structure.

Fiona-Jane Brown has another look at Aberdeen’s quirky and interesting past. 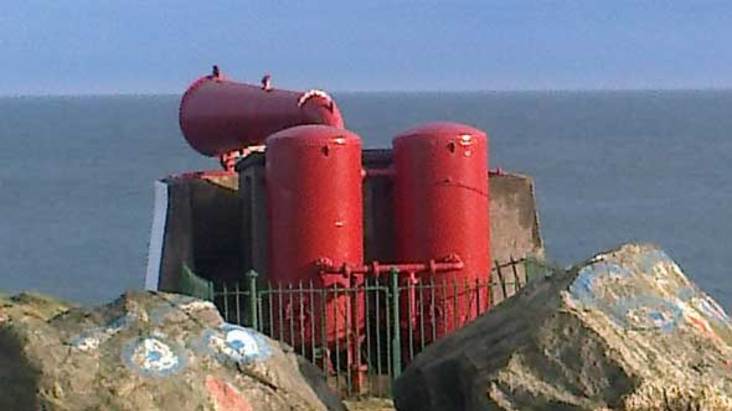 The Torry Coo is not a bovine, but the foghorn situated below Girdleness Lighthouse on Greyhope Road.

Sadly the horn has not sounded since the late 1980s, as it and all others in Scotland were shut off by the Northern Lighthouse Board, modern ships thought to be too large and enclosed for the captain to hear a fog signal.

However, there are still signals near some Scottish lighthouses, and in the south of England, ‘fog cows’ regularly bellow as the mist envelops the coast.

But our ‘Coo’ was completed in 1902, replacing an earlier fog signal east of the present site. The ‘moo’ was ingeniously created by means of 25bph oil-fired engines which produced compressed air, then forced it through a rotating siren.

The large tanks on the foghorn stored the air as the ‘Coo’ sounded her warning to ships. The lighthouse and fog signal were introduced to patrol Greyhope Bay as a result of the terrible sinking of the Oscar, a whaling ship which ran aground in a storm in 1813, with the loss of 42 lives. However, it would be another 20 years before these safeguards were in place and the Stevenson-designed lighthouse was opened in 1833.

It was a Scot who invented the automated fog signal after centuries where only a bell was used (Aberdeen’s fog bell can still be seen near the new Marine Operations centre in Fittie).

Robert Foulis, who had emigrated to Canada, heard his daughter’s piano playing as he returned home on a foggy night and noticed the low notes carried further. He built a steam-powered device which sounded sonorous bass notes and it was installed on Partridge Island, New Brunswick in 1859.

The sound of our Torry Coo not only resembled the bovine braying, but to a legendary sea monster that lived in Greyhope Bay it sounded just like a male of her species. The story goes that she cried back to the fog horn’s sound, thinking it was a potential mate, yet was eternally disappointed as although she heard the returning call, she could never find her handsome male monster!

The echoes of the fog signal out at sea were apparently the lady monster’s anguished utterances, until of course, the Coo was silenced forever.

Ships today are full of technical wizardry which have made the Coo and her ‘herd’ obsolete, but you never know when we will need them again!

3D Printing: OK, this is weird, and I know absolutely nothing about it, but they are printing and making 3D replicas of lighthouses, and MANY more useful, and not so useful. THINGS! Naturally the website is called Thingiverse – I suppose that is a play on the word Universe.

So, if you know anything about 3D printing this might interest you. If you just want to see weird things, including lighthouse models, then drop by their site.

Here is something else lighthouse to collect. I did not know it, but Mississippi had the Biloxi lighthouse on their licence plates since 2007. It is now being replaced by B. B. King’s guitar, so, if you want to get them, get them now before they are thrown away. Remember, a plate was issued for each town, so lots of plates to collect!

The state is required by law to change their tags every five years, and the old design, with a sunrise behind the lighthouse, is meant to represent the recovery of the coastal areas from the devastating effects of Hurricane Katrina. The Biloxi Lighthouse is Mississippi’s only lighthouse, and is a private aid to navigation owned by the city of Biloxi.

Mississippi joined Connecticut, Delaware, Massachusetts, Michigan, New Jersey, North Carolina, Ohio and Virginia, all of which had a lighthouse license plate, either as a regular plate, or as a special purchase. Collect them all!

The story of a nineteenth century Spurn Point lighthouse keeper has united two families, both living in faraway Sydney, Australia, but each previously unaware that they had ancestral connections.