I published a report January 04, 2012 on the building of McInnes Island lighthouse in 1953 based on the adventures of Ken Stewart who was part of the construction crew. I updated that post later with more information in the form of a PDF file.

When I arrived with my family in the winter of 1977 the first thing we did was explore the island. Pictured left is a small log cabin buried back in the woods on the trail to the SW tip of the island.

Now let’s skip ahead to December 09, 2012 when I received an email from Mrs. K. Marshall with another photo of the same cabin taken about twenty-two (22) years earlier! What a delight to see what she had written on who built the cabin and also for her to see my photo taken so many years later.

In her email she said:

My grandfather James “Jimmie” Smith was a junior lighthouse keeper on McInnes for a few years in the late 1950s.
He was there with my grandmother Mildred “Millie”, and their 2 daughters who were teenagers at the time, my mother Carol and her sister Sharon. 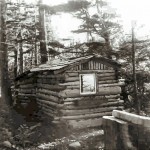 These photos are of a driftwood log cabin that my Mom and her sister built on the island. I’ve been scanning old family photos this past week and have quite a few from the lighthouses.

I’d be really curious to know if the cabin was still standing while you were stationed there.

Well, as I told her the cabin was there in the winter of 1977, but by the summer of 1978 we had burnt it down as it was very unsafe for anybody to venture inside and could not be repaired. An email from her Mom, the Carol mentioned above, says:

[To build] the cabin I pulled and carried the logs from just below the cabin from the beach. The shakes I cut those with a hand saw to length. Split them with Mom’s best butcher knife and a hammer on the back of the knife….that didn’t go over at all well…believe me.

That end of the island where the cabin was. No one had trails there at all. Sharon and I started to explore that area. Dad, Bruce and Tony when they realized where we where disappearing to, they cut the logs of the trail so the adults could get into that area.

The swimming pool was past the

cabin. You went up the hill and there was the natural crater in the rock. Dad and Mom used a washing soda to clean it all. Then the guys had a pump and hoses. They pumped new sea water up into the basin. Dad made up a bag of concrete to sort of plug one end of the crater. We just lived in that area all good days. Lots of nights we spent in the cabin.

One of the photos really intrigued me as there was no trace of this set of stairs up to the pool when I arrived there. There might have been a few pieces of wood in the grass, but nothing more.

In 1977 it was all a very narrow trail through grass and tree stumps. About every twenty-five (25) years the trees had to be cut to allow the helicopter access to the island. Plants (including trees) grow very fast in the west coast rainforest climate – lots of rain!

A lot of the station still looks the same from the 1950s as it did to me in the 1970s – well at least similar. Take these photos of the lighthouse sitting high above the sea. The big diaphone foghorn is visible as a black blob on the front of the building on the right The radio beacon antenna shows in both photos.

The outside of the engine room was a bit more bare and you will notice the roof is flat. The pitched roof was installed mid 80s. The doorway was also moved to make a smaller engine room. The lantern and railing were also changed in the 1980s from rusting steel to new aluminum ones.

Another interesting comparison is the inside of the radio room – the door on the right in the photos above. Inside the room were two large radio transmitters (one a standby) for a non-directional radiobeacon (NDB). The 1950s photo shows that they took up a lot more room than the later photo on the right (smaller electronic circuits). Also in the right photo note the Spillsbury-Tyndall HF radio (far left) and the light grey box on the right housing the Emergency Locator Monitor (ELM) and and behind that the darker grey box with handset housing the always malfunctioning VHF ALN radio (ALN = Automated Lightstation Network; later changed to ALAN (Automated Lightstation Alarm Network).

Inside the engine room was different too. In the 1950s it was a large open room with many engines and piping. In the 1980s it was divided and all the windows sealed up to create an automated engine room. It sure lost a lot its character. The 1980s photo at right shows a grey bank of many drawers of electronic horn controls (right center) – the new improved device that replaced the mighty diaphone horn. It stands exactly where the old diaphone horn trumpet pierced the wall to the outside just above it.. After many newer versions of the electronic horns, Coast Guard finally removed foghorns from most lighthouses in 2003. I sure miss the old diaphone!

In the two photos note the two windows and the work bench are the same.

The houses are similar although there seems to be a lot more boardwalk. I know we removed a lot of it to make it safer to drive a tractor because a lot was rotten and dangerous. There were actually three (3) houses, but only two show in the 1950s photo

Here is an interesting shot showing the aerial line (aka highline) at the back side of the island, with the CGS Alberni anchored off the station delivering supplies. The right photo shows the highline again with probably CCGS Wolfe anchored off station.

A lot of these photos are not very clear, but I have been promised higher resolution scans which I will upload when received. The information in these photos is priceless as the Coast Guard did not photographically preserve many installations in the early days

The women in the early days had to be a hardy type as they had to take over for the lightkeeper husband when he was ill. According to Mrs. K. Marshall, her mother was well suited to the job. She says:

She could tear them down and rebuild them [the engines]..no kidding. Mom is amazing and totally unconventional.

Mom was about 16 when she left McInnes, she married in 1960 in Prince Rupert. My dad, Clayton Marshall was on the Alexander Mackenzie – they called him “Bozo”, I think he was a first mate
She’s had a lot of careers, drove logging truck in Pemberton, school bus for years in Alberta, foreman at a furniture factory

in the lower mainland.