For an update on what a Mise Tale is then please see Mise Tales One.

The first colony on Martha’s Vineyard, Edgartown is known primarily for its preserved 19th century seaport, picturesque harbor, and whaling traditions. Depicted on an Expandable Wire Bangle, the Edgartown Lighthouse is a beacon of light for generations of sailors and a popular point of interest for all seasonal guests.

Can You Believe This?

During those times [late 1870s] lighthouse keepers were never supposed to leave the property unattended day or night, summer or winter, and the Dodges faithfully abided by that regulation for all of the years they were there which ended up being 51 years. More . .

Last summer the Thousand Islands Sun newspaper ran a fascinating article entitled, “Woman who kept lighthouse 51 years recalls ship wreck”. The article was a reprint written by the late Ernest Cook in 1929 of an interview he did with one of the keepers of Sisters Island Lighthouse.  The article gave a very in depth look at what it was like to be a light house keeper in the late 1800s based on the firsthand experiences of Mrs. William O. Dodge who had helped to literally “keep the light burning” at the Sisters Island Lighthouse for over 50 years.

The article especially interesting to me since that particular light house is visible from our camp.  So, it was fun reading the rich history and many nautical adventures that our lighthouse and its keepers have had over the years.

Sisters Island Lighthouse is located near Chippewa Bay, New York.   Shortly after the Civil War, the government decided a lighthouse was needed at that point in the river.  In 1870 the building was ready to be moved into and the lights were ready to be lighted.  It was Mrs. Dodge’s father in law, a retired officer of the 142nd Regiment, who was first hired to man the light.  Mrs. Dodge married William Dodge Jr in 1872 and soon after, the young couple moved into the lighthouse to assist in keeping the light. When William Dodge Sr. passed away, they became the full-time keepers of the light.  During those times, lighthouse keepers were never supposed to leave the property unattended day or night, summer or winter, and the Dodges faithfully abided by that regulation for all of the years they were there which ended up being 51 years.

Over the half century they were there, Mrs. Dodge remembered seeing several shipwrecks near their light but one in particular remained most vivid in her memory.  The year was 1894. It was a calm summer night in June. Mr. and Mrs. Dodge had gone to bed but were suddenly awakened by a terrible crash seemingly at their very door. They ran to the door and saw the Canadian passenger steamer, “Ocean” right in front of them with a gaping hole in her side that Mrs. Dodge stated was “large enough to drive a team and wagon in”.  Also right in front of them was the barge, “Kent”, which was the vessel responsible for having rammed the hole into the steamer.  It was clear that both ships had suffered serious damage and both would have been lost, along with their crews and passengers had the captains of both vessels not aimed for the lighthouse and driven their boats into the shallow waters and onto the rocks surrounding Sisters Island.  Mrs. Dodge was afraid that lives would be lost especially since it was clear that anyone who had been in the section of the ship where the Kent had rammed it, could not have survived.

As it was, thanks to the good sense and expertise of the Captain of the Ocean, every one of the 15 passengers was gotten off the ship and taken to the safety of the island where Mr. and Mrs. Dodge proved to be excellent hosts for them.  They brought them into their kitchen where they could dry themselves by the fire around the stove.  Mrs. Dodge noted how they then “packed our people away for a little rest as best we could.”  Meanwhile the resourceful ship’s crew managed to rescue all of the luggage as well as enough food for a hearty breakfast for all, including the necessary cup of tea for all of the Canadian guests.

It was later determined that the Captain of the Kent had dozed off for just a moment which is what caused the collision. The Captain of the Ocean had observed the approaching Kent as it suddenly veered off track and headed right for them. Unfortunately, it was too late to respond. Amazingly, both ships were pulled off of the rocks, and the Ocean was raised and ready for repairs in less than two weeks.

I would have to say that the moral of this particular nautical adventure is that if you are going to wreck your ship, it is always best to do it in front of a lighthouse.  I am sure that the captains, crews, and passengers of both ships would have to agree.

Let’s face it – we are all going to mess up now and then. And sometimes, no matter how hard we try to avoid it, we can mess up pretty badly.  It’s not a matter of “if” but “when”.  But we do have some say as to “where” we are going to mess up. We can either try to navigate through this life on our own, or we can keep our eyes focused on the light of God’s love – a love that guides, forgives, and can even bring good out of our worst mess ups.

The Psalmist may not have been familiar with lighthouses but he certainly knew who his source of light (and life) was.  He wrote, “The Lord is my light and my salvation; whom shall I fear? The Lord is the stronghold of my life; of whom shall I be afraid? Though an army encamp against me, my heart shall not fear; though war arise against me, yet I will be confident… For he will hide me in his shelter in the day of trouble; he will conceal me under the cover of his tent; he will lift me high upon a rock” (Psalm 27:1-5).

Jesus assured us – promised us – that we could rely on Him to guide us safely through our darkest night.  He told us, “I am the light of the world. Whoever follows me will never walk in darkness, but will have the light of life” (John 8:12).

When the going gets rough, we don’t need to fear that our lives will end in a shipwreck as long as we are aimed for the solid ground we will find under His guiding light.[/private]

For all true lovers of lighthouses, these lighthouse T-shirts are 100% cotton, heavyweight, high quality garments. 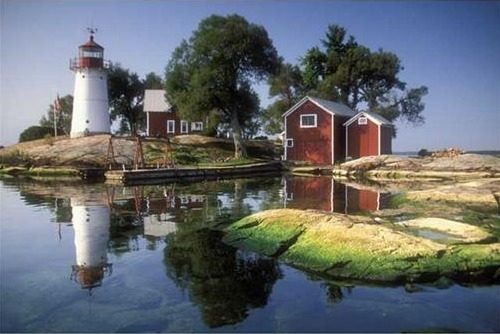 So named for marking the point where the shipping lanes of the St. Lawrence Seaway cross into Canadian waters, Crossover Island is home to a historic lighthouse that dates to April 1847, when it was built to guide ships away from a dangerous nearby shoal. The following year, a home was built for the lighthouse keeper, along with a boathouse and smokehouse. All of these structures—save for the original lighthouse, which was replaced with a sturdier version in 1882—survive to this day. The current owner, an ardent preservationist, applied for landmark designation and in 2007 it was named a National Historic Landmark. Now the private island and its historic cluster of buildings are for sale, asking $540K. – more . . .

Retired (2001) British Columbia lighthouse keeper after 32 years on the lights.