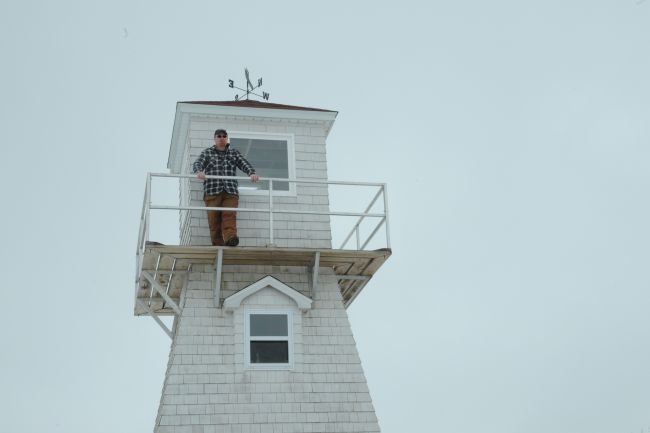 Wall looks out from the top floor his lighthouse.

It’s three storeys tall and is a scaled down replica of the Cape Tryon Light.

It’s currently sitting on Wall’s front lawn in New Annan, on the headlands of the Barbara Weit River.

Anyone who’s driven by his property would probably have noticed the structure – it’s pretty hard to miss. The lighthouse is the pride and joy of his carpentry hobby, said the career lobster fisherman, but he’s recently decided that it’s time to move on to his next challenge.

“In some ways I’ll be sad to see it go … I’d miss seeing it out the window, it adds some character to the place,” said Wall.

“But that’s not to say I couldn’t build another one if I missed it that much.

“I guess it was on the bucket list you could say. So I did it and now I can say I can cross it off,” he added.

Wall put up the “for sale” ad on kijiji.com four days ago and he said he’s already received several requests from people to come see the lighthouse.

“I put it up (Wednesday) and I had a response 10 minutes later, actually,” he said.

There’s just something about lighthouses that seems to attract people, he said, so he’s not too concerned about finding a home for his.

“There are people who, if they take an interest in something, you never know what they might do,” he said.

His interest in lighthouses started right about the time he got his drivers license as a teenager.

He and his buddies would drive around and explore all the different lighthouses around the Island’s coast.

Specifically, he developed an interest in lighthouses with homes attached to them.

As an amateur carpenter with a life-long love of working with his hands, he appreciated the craftsmanship in the structures.

Eventually he started thinking about building his own lighthouse home.

“I talked about it long enough I think people probably thought I was losing it,” he laughed.

However, those were the fancies of a younger man, and when Wall grew up and had a family he realized a lighthouse home wasn’t practical.

But, in 2007, he started his smaller-scale lighthouse, using the building’s original plans and downsizing them by about one floor.

It took him about a year to build, with the help of a lot of friends.

It was a challenge, he said, but great fun.

“It was a lot of climbing for sure, and a lot of times while I was working I’d say ‘what am I doing this for?’ Some days you’d get a little discouraged,” he said.

But end result was a lighthouse that really looks like the real thing – he usually has to convince people that he built it and didn’t just haul it home from somewhere.

He takes those comments as the highest of compliments. 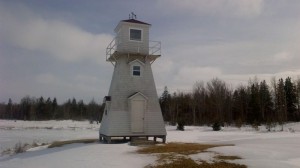