In my twenty-five (25) years on McInnes Island one of the most spectacular sights in the winter was the Northern Lights display (aurora borealis1) in the northern night time sky. Absolutely beautiful!

This was brought to mind the other day when I saw this October 10, 2012 article online Image: Aurora Dips South Across Canada 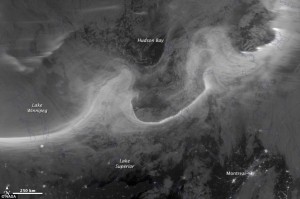 The aurora borealis was photographed from space over Montreal and Lake Superior on Oct. 08, 2012. CREDIT: NASA Earth Observatory

This visible light image from the Suomi National Polar-orbiting Partnership (Suomi NPP) satellite shows the northern lights swirling across Canada’s Quebec and Ontario provinces. The city lights of Montreal also shine in the bottom of the image.