This website was created by John Coldwell, a.k.a. in this website as JC, JAC, retlkpr, or administrator or admin. His occupation for 32 years was Lighthouse Keeper on the Canadian British Columbia (BC) coast from 1969 to 2001. For the last twenty-five (25) years of his service, he was Principal Keeper on McInnes Island lighthouse and worked with many good assistants. Upon retirement, he decided to try to collect other lighthouse keeper’s memories and put them down on paper – stories exchanged between keepers, stories never shared with anyone, and stories now worth sharing. If you would like to directly contact John, please find him at misterex@gmail.com.

The vast majority of the research and effort that has been put into this impressive and comprehensive website is the work of John Coldwell. However, in 2017, the Sheringham Point Lighthouse Preservation Society (SPLPS) assumed responsibility for lighthousememories.ca. John does, nonetheless, continue to be an invaluable presence on the website, and the SPLPS is immensely grateful for his ongoing support. 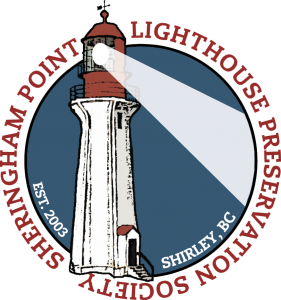 The Sheringham Point Lighthouse Preservation Society is based in Shirley, British Columbia. The Society was formed in 2003 as a community-based force to preserve and protect the Sheringham Point Lighthouse, and other significant foreshore properties, in Shirley, following a concern that lighthouse would be declared surplus by the Canadian Government. On February 5, 2010, the Capital Regional District (CRD) and the SPLPS received a letter stating that the light station and the surrounding lands had been finally declared surplus by the Department of Fisheries and Oceans (DFO). In 2012, the SPLPS applied for the Sheringham Point Lighthouse to become a National Heritage site, and in 2015, the site was awarded National Heritage status. Following its establishment as a Canadian Heritage site, the station and its surrounding lands were transferred to the Society, also in 2015. The Society is currently in the process of restoring the station and ensuring that it will be a successful passive park for the public to enjoy for generations to come.

The Sheringham Point Lighthouse Preservation Society is incorporated under the Society Act of British Columbia, and is a registered charity. The SPLPS is a democratic, membership-based organization, operated and directed by volunteers, under the guidance of an elected Board of Directors, and a Board of Advisors.

More information regarding the Sheringham Point Lighthouse Preservation Society can be found at sheringhamlighthouse.org.

The Society requests that no story, photograph, or any other item on this website may be reprinted or reproduced without the express permission of the author.

A foreword by John Coldwell:

What is the attraction to becoming a lighthouse keeper? I was asked this question the other day in an email.

Well, first of all it was a job, and if you didn’t have a job, it was the means to having a salary. Once working, I think the freedom of the job changed you, but it was still a job. You could be promoted or fired depending how well you did, just like any other job.

You worked completely unreasonable hours at times. You had so many deprivations that you could have been living in a third world country. No mail for a month, no fresh groceries for a month, no TV, barely any radio, no telephone, lack of water, shortage of electricity, no immediate medical aid except your own knowledge, no friends to visit, no parties, no communal sports, no bars, no fast cars (no fast boats either!), no libraries…the list is endless.

But…we did have a job, peace and quiet, family with us 24 hours a day, 99% of the time very good neighbours as friends, and a feeling that we were doing something good for others. We were situated in absolutely beautiful (but rugged!) settings and had free access to the wilderness…it also had access to us as well, as you will see from some of the stories!

I worked my whole life in isolation except one year in Victoria, BC in 1968. I was a weather observer in Norman Wells, NWT in the sub-arctic before joining the lights. I guess I liked isolation but never thought about it at all when applying for a job. Same as everybody – if the job looked interesting apply for it! If you got it, great! If not, then look for another. Not a problem.

Maybe that is the attitude that makes a good lighthouse keeper – nonchalance. One never knows what is going to happen so one just accepts it as part of the job. I guess it was the same feeling that the first explorers like my great-g-g grandfather had – no use getting excited – it just wastes energy.

We did our job and planned each day around the work requirements. We knew what we had to do and had no one looking over our shoulder checking on us each day. It was relaxed and yet always a feeling of tenseness. Check this, check that. Watch the sky. Watch the sea. Always watching. Always waiting while working. It became part of our lifestyle.

We were always prepared as far as each individual could be. A lot of the people were very independent. My car was, and still is today, filled with tools and material for repairs, breakdowns, tows, overnight emergencies, etc. I know there is CAA & AAA, and others, but I would rather depend on myself. We were all like that. The old Boy Scout motto – Be Prepared.

The supervisors we worked under were living in a different environment. Most had no idea what life was like on a lighthouse. They were city people and we were names on paper. The only ones that really knew what our isolated lifestyle was like and who did not ask silly questions such as “Aren’t you bored?” were the ships captains and crews, the helicopter and coastal airline pilots and the many visitors who made it to our island on their own – fishermen, tourists, mission boats, work crews, RCMP, etc. as they had experienced all or part of our lifestyle but under different circumstances.

In the early days (pre 1950’s) life was really rough on the lighthouses, but by the 1960s and the end of the kerosene days and with the coming of electricity, life was better. Before the advent of helicopters we hardly had any contact with Coast Guard personnel in the office. Maybe once a year. It was nice!

Then they started taking parts of our job away and giving it to trained employees in town who came out to repair the stuff that we had been repairing for ages – e.g. diesel engines, foghorns, lights, water supplies, boardwalks, houses, etc.

Then they started the inspection and safety bit. They sent people out to test for mercury, check for lead and asbestos, check for oil spills, check for garbage dumps, etc. It finally got too much for me – I was glad I could retire.

In short, we enjoyed the peace and quiet when it was there and the challenge when it came to us!

P.S. Please read the foreward to lightkeeper Don Graham’s book Keepers of the Light or the praise on the Harbour Publishing website. Don’s prose is more eloquent, mine more descriptive, but we both say the same thing. Another author that provides more detail on this subject is Chris Mills in his book Lighthouse Legacies available at Amazon.com.

The original website which I am cannabalizing and which will be appended to this one is located here.